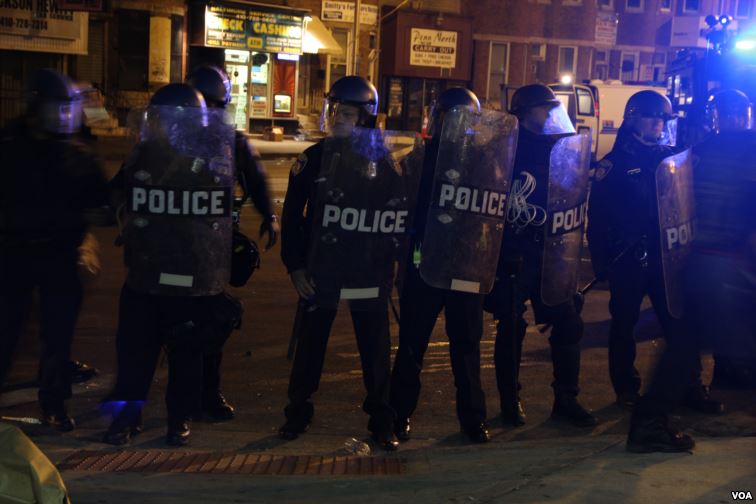 There’s no shortage of pundits condemning the riots in Baltimore. There are also plenty of well-meaning people focusing solely on the disenfranchisement of particular pockets of that city as if the human beings suffering there were characters in some morality play. But it’s time to talk economics, because the events in Baltimore didn’t happen in a vacuum. “In fact,” writes Harlan Green of PopularEconomics.com, “the Baltimore riots are the result of an economic system that can only be described as broken, where the bullies win, everyone else loses.”

How did the economic bullies win in Baltimore? There are at least two different ways. The first is the actions of JP Morgan-Chase, Bank of America, Barclays, Citi-Bank, and Deutsche Bank, who, according to a lawsuit filed by Baltimore city and dozens of other cities, states, and government entities, manipulated “interest rates on hundreds of trillions of dollars’ worth of loans and investments” purportedly used to fund those cities. Those banks allegedly kept “LIBOR,” the London interbank offered rate, artificially low during the financial crisis of 2008 and beyond, thus “robbing [Baltimore and other cities] of millions of dollars in returns on investments such as interest-rate swaps” – themselves risky financial instruments that big banks force cities to use in order to fund transit systems, schools, water works, and other city services. As the Washington Post reported in 2012, those “investment earnings allegedly lost in the swap deal could have helped cash-strapped Baltimore balance its budget without resorting to all of the service cuts and payroll reductions that it was forced into during the financial crisis.”

Those cuts, of course, were devastating, thrusting more residents of Baltimore into unemployment, and stripping the city of its mechanisms of connecting the community with vital resources. This interview with Bill Black contains more details about Baltimore and the LIBOR scandal.

The second material cause of the devastation in Baltimore is the subprime mortgage crisis, of which University of Michigan Professor Martha Jones writes:

When examining the tensions that erupted in Baltimore in the last two weeks, the consequences of losing homes should not be minimized as a factor in the sense of outrage and injustice. Foreclosures in the wake of the subprime mortgage scandal of 2008 have been the end game in predatory lending schemes that plundered the single modest asset held by many black Baltimoreans: their homes. In a 2012 settlement reached with one lender, Wells Fargo, some 1,000 black and Latino residents of Baltimore received $2.5 million in restitution for having been charged higher fees and interest rates than those assessed to their counterparts in predominantly white communities. The University of Baltimore’s Baltimore Neighborhood Indicators Alliance research has found that, between 2008 and 2009, foreclosure filings in Baltimore increased by over 38 percent. Between 2009 and 2012, more than 14,000 such proceedings were brought against the city’s homeowners.

The subprime mortgage crisis resulted from an increase in subprime lending from 8% or lower to 20% or higher from 2004 to 2006. 90% of those were adjustable rate mortgages, which re-set at higher interest rates, causing mortgage delinquencies to skyrocket. Along with the loss of nine million U.S. jobs, the crisis devastated America’s cities.

Although corporatist propaganda blames the borrowers and a government eager to get people into homes, Barry Ritholtz of the quantitative research firm Fusion IQ, and many others, have pointed out that the blame lies with those who had the power: asset managers turning to high-yield mortgage-backed securities and turning a blind eye to their due diligence responsibilities; credit agencies who lied about the value of those junk securities; and bankers pushing unstable derivatives, all undergirded by a Wall Street compensation system rewarding short-term performances rather than long-term stability or genuine improvement in borrowers’ lives.

Economically disenfranchised, hounded by creditors and predators, Baltimore was ripe for unrest—not because of people with bad attitudes, but because of economic mismanagement at the hands of a largely white, wealthy power base on Wall Street.

While there are many political solutions to disenfranchisement, the challenge of economic solutions remains hindered by the reliance of cities like Baltimore on Wall Street finance. That reliance continues to cost cities dearly, as revelations surface of big banks taking billions of dollars from city budgets and pensions for service fees and through astronomical interest rates. Wall Street apparently can’t help doing what it does, even with crumbling cities and broken bodies all around it.

Solutions must start as far away from Wall Street as possible. Instead of entrusting city budgets, mortgages, and credit to big private banks, a public bank like the Bank of North Dakota would not only avoid risky derivatives and other disaster-inducing speculations, but would, in partnering with local banks to strengthen capital and deposit bases, keep loans on its books rather than being forced to sell them off to investors. This practice allowed North Dakota to “avoid the subprime crisis that destroyed the housing market in other states,” according to public banking author Ellen Brown.

Such public banks would be literal manifestations of economic democracy, since, like the BND, their deposits would be comprised of tax collections and public fees, and their charters would mandate lending in the public interest, with their modest profits being returned to government coffers rather than siphoned off by aloof shareholders (Last year, North Dakota got a 17.6 percent return rate on its BND investments; imagine what that would mean to cities like Baltimore).

Public banks would create a lending economy and real estate economy that would completely transcend the tired and mean-spirited debate between those blaming the lenders and those blaming the borrowers for the subprime mortgage crisis. If the argument is that lenders should not have lent to people who couldn’t afford massive increases in their mortgage rates, then the solution is not to deny people the opportunity to buy homes. The solution is to build an economy based on low-interest, sustainable lending and credit for all. The voices of Wall Street say this is impossible, but the potential of public banking says otherwise. And for those who still could not afford mortgages, public banks could finance other affordable housing options, and save city budgets that could be used, if necessary, to subsidize housing.

These material causes should not be interpreted to imply that deep-seated institutional and personal racism is not at work in Baltimore and other cities. There are many good activists and scholars examining and calling out that racism, and economic analysis should complement, rather than excuse, the fight for racial justice. But financially-empowered local communities will be in infinitely better shape to fight such racism, render it materially irrelevant, and build their own locally responsive centers of power.

In the end, any solution that leaves big, Wall Street banks and private financiers in the driver’s seat guarantees more impoverished cities, more police brutality, more angry uprisings, and no long-term fiscal solutions. Those big private entities are materially responsible for the ruin, alienation, violence and hopelessness in Baltimore. We may not be able to bring them to conventional justice, but we can and must bypass and neutralize their influence as we rebuild what has been lost.

Matt Stannard is a member of the Board of the Public Banking Institute and the Policy Director at Commonomics USA.