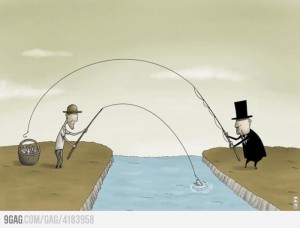 A specter is haunting contemporary discussion of public finance: The word “socialize.” We’ve heard it before.

Indeed, the Bank of North Dakota has been called a “socialist” bank, sometimes ironically, sometimes sincerely and positively, and sometimes derisively. But the BND and its partner-in-egalitarianism, the North Dakota Mill and Elevator, are unquestionably socialist. They are not Bolshevist, though, and that’s a shorthand way of saying that “socialist” institutions can sometimes make markets work better for all stakeholders, provided that the big capitalists back the hell off and allow the sustainable management of markets.

Speculator manipulation of the Homestead Act devastated North Dakota farmers and by the turn of the century, those manipulative capitalists had grabbed up a third of North Dakota land takings, which hurt family farmers. This was exacerbated by big banks and grain companies, especially in Minneapolis and St. Paul. In 1915, spurred by a socialist and struggling farmer named A.C. Townley, a group of North Dakotans formed the Nonpartisan League to push back against those powerful grain and banking interests. The NPL sparked the creation of both the Bank of North Dakota and the North Dakota Mill and Elevator, both of which still operate as public entities, the only ones of their kind in the country.

This was socialism. But notice that it made commerce–private commerce–work better, provided that the businesses were small and relatively non-exploitive, and not pawns of speculative finance capital in particular. So it’s the kind of socialism likely to make Marxian or revolutionary socialists a bit salty.

Two recent calls to “socialize” banks recognize the accomplishment of the Nonpartisan League narrative without explicitly mentioning it–and these documents also don’t explicitly call for the withering away of capitalism. Their conclusions, which come from a fairly different set of faces and organizations than those found in the monetary reform movement (although some may converge under “New Economy”), lead me to think that public banking is a bridge demand–common ground for a bunch of different movements, some left, some libertarian, some reformist.

The Committee for the Cancellation of the Third World Debt and its Committee for the Abolition of Illegitimate Debts dedicate themselves to “the planning of activities and radical alternatives for the creation of a world respectful of people’s fundamental rights, needs and liberties.” The group recently released “What is to be Done with the Banks? Radical Proposals for Radical Changes,” whose authors include UMKC’s Michael Hudson (a scholar who has appeared on PBI’s “It’s Our Money” podcast, well known CUNY socialist David Harvey, Left Unity economist Susan Pashkoff, and 21 other well-known radical economists.

The answer to the title question is: Socialize them. But it’s important to understand what the authors mean by this, because we live in an age when people don’t know what “socialism” means–even when we’re for it, and almost always when we’re against it. They say:

The word “socialisation” is used in preference to “nationalisation” or “state ownership” to make clear the essential role of citizen oversight, with decision-making shared between directors, personnel representatives, clients, non-profit associations, local officials and representatives of the national and regional public banking entities. Therefore, how that active citizen oversight will be exercised will need to be defined by democratic means. Similarly, the exercise of oversight over the banks’ activities by workers in the banking sector and their active participation in the organisation of the work must be encouraged. Bank directors must issue an annual public report on their stewardship. Preference must be given to local, quality service, breaking with the policies of externalisation currently being pursued. The personnel of financial establishments must be encouraged to provide authentic counselling to the clientele and to break with current aggressive sales policies.

To “socialize,” then, is not merely to eliminate their private ownership, but to place under democratic control. And I would gather this means externally and internally–the ideal being worker-managed banks under democratic public control.

Placing banks under democratic community control is certainly compatible with the vision put forward by public banking movements in U.S. cities and states, although in the well-established “best of both worlds” truth of public banking, a singular “socialized” or “socialist” bank like the Bank of North Dakota can help both private banks and private businesses. But public banks have been privatized in some parts of the world, leading the authors to call for strengthening existing public banks and de-privatizing others.

The Committees, which are focusing on European reform, also call for the European Central Bank to grant zero-interest loans to public utilities.

Require private banks to hold a quota of public-debt securities.
The central banks should again grant loans at zero interest to public authorities. Unlike the current practice of the ECB as a result of the European treaties, the central bank would be able to provide zero-interest financing to the State and all public entities (towns, hospitals, social-housing entities, etc.) in order to conduct socially equitable policies in the context of the environmental transition.

This is a great idea. It would be a powerful rejoinder to apologists for the current Wall Street model of public finance, which –whether you’re a free marketer or a socialist hippie, you’ll admit– has been an unmitigated disaster for local government.

The state’s heavy footprint in the financial sector is making it increasingly difficult to argue banks should remain privately owned. Why should profits accrue to shareholders, after all, when the risks and losses are socialized?
Public banks are not a novelty of course. Many countries, such as Germany and France, have long had such institutions, either in the form of commercial banks or development banks that provide loans to specific economic sectors.

but also points out that the public banking movement needs to be part of a larger economic justice movement.

And public ownership alone is no silver bullet for challenging global capitalism and its attendant crises. More often than not, these banks behave no differently than their private counterparts, or are controlled by public bureaucracies that end up serving particular private interests.
Simply put, public ownership of banks is necessary but not sufficient.
For public control to be liberatory, it must be part of an expansive vision that reshapes the practices and uses of credit along egalitarian lines. Private finance has promoted the commodification of (and shaped the organization of) key sectors like health and education. Taking control of credit must mean democratizing access to these essential services.

This is true even if the slogan is “public banks” rather than “socialize the banks.” It’s true even if public banks exist mainly to help small private banks invest in community goods (assuming the big banks will eventually fail or be rendered irrelevant and unnecessary by large, state-level public banks). It’s true in part because the monetary reform movement is sometimes populated by people who, while in favor of public banking, ignore many other important facets of economic justice (particularly the necessity of involving poor and working people, as well as historically oppressed groups, in the decisionmaking process).

In the end, whether you want to “save capitalism” with public banks or use them in order to transition to a post-capitalist economic order, the key component is to democratize and not merely “socialize” finance, although both are important.