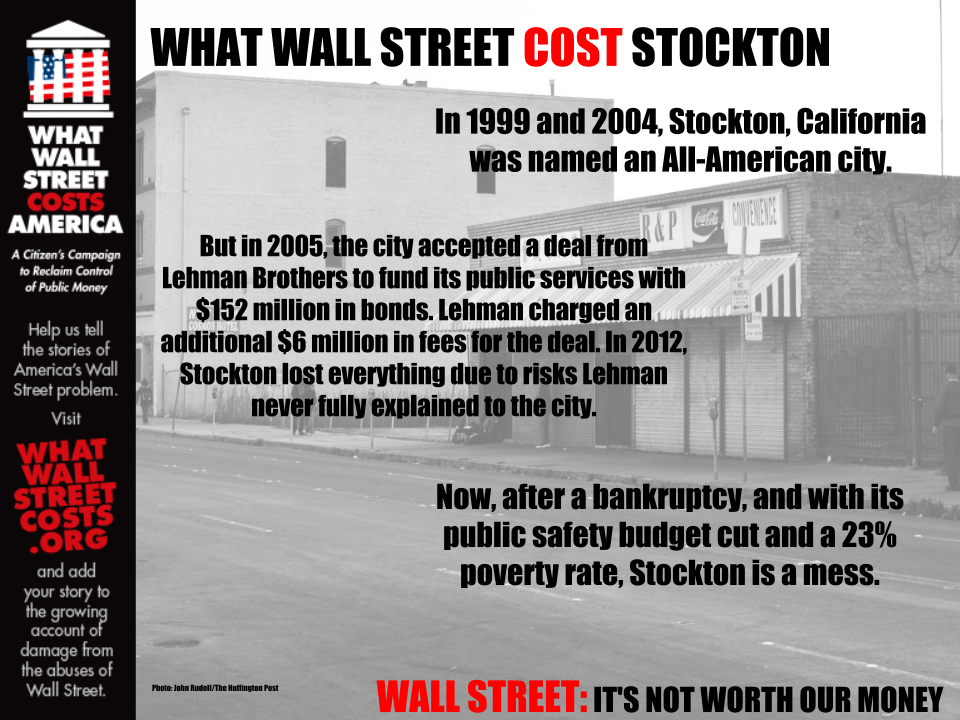 This story is part of PBI’s ongoing project, What Wall Street Costs America. Please support the project at our fundraising page, and learn more about it–including how you can be one of our researchers and storytellers–at our project page. And please feel free to share the graphic below.

Stockton, California, a city with a beautiful waterfront, a rich history, and the distinction of being named an All-American city in 1999 and 2004, is now hobbling economically–not because of its residents, but because of Wall Street. In July 2012, the city filed for bankruptcy. Why?

In 2005, the city began losing public funds because the subprime mortgage crisis had hit the area especially hard. Stockton found itself owing $152 million to the California State Pension Fund, and had no money to fund its own public services. So Lehman Brothers, a Wall Street firm, made the city an enticing offer: $152 million in fixed-rate bonds to keep parks, police stations, and garbage collection running. Lehman not only didn’t fully explain the risks to city officials; they also charged $6 million in fees for the deal–a deal that ended up giving Stockton nothing in return.

As a result of Stockton’s reliance on Wall Street financing, the city is now mired in poverty, with underfunded social services and public safety. 23% of Stockton residents live below the poverty level, compared to 14.2% in California as a whole. 10.1% of Stockton residents have incomes at only 50% of the poverty level, compared to 6.3% in the state as a whole. 30,000 children there live below the poverty line. Cuts to the city budget have resulted in a public safety nightmare, and violent crime there has soared.