Central banks have run out of ammunition. Before the 2008 banking crisis, the fed funds rate was over 5 percent, so the Fed had plenty of room to goose the markets by dropping the rate. Today the fed funds rate is so low that the Fed would have to drop rates into negative territory to have an effect, a maneuver that has not been successful in Europe or Japan and would wreak havoc on US financial markets.

A growing number of commentators are therefore predicting that central banks will soon be resorting to “helicopter money” – a direct drop of money into the economy. These commentators are not just left-leaning political candidates looking for votes but include bankers, investors and journalists with decades of experience in the financial markets, including billionaire investor Ray Dalio, bond investor Bill Gross, real estate investor George Gammon, Tom Rees at The Financial Times, and researchers at Deutsche Bank and The Business Telegraph.

They see helicopter money coming but warn that it’s a treacherous course, because it will drive consumer prices through the roof. So here I want to show why it won’t. In fact regular injections of new money directly into the economy are just what is needed to avoid the booms and busts plaguing economies for centuries.

What Is Helicopter Money and Why Do We Need It?

QE has not worked to stimulate productivity because the money has gotten trapped in the financial economy, where it has driven up asset prices without creating new goods and services. The problem is the “Fed put” – the central bank’s shaping of monetary policy in a way that keeps financial markets from falling. That means it’s now easier and safer to make money in the financialized economy than in the riskier, more labor-intensive producer economy, deterring investors and business owners from investing in producing new goods and services.

Meanwhile, the productive economy is suffering from insufficient demand – the spendable money driving producers to produce. Helicopter money would put money in people’s pockets, creating the needed demand. But that solution always runs afoul of the objection that it will drive up prices, just as adding more water to a bucket of water will cause the water level to rise. That would be true if the bucket had no holes, but today the consumer/producer bucket contains massive leaks.

The money supply is also not fixed and stable. Money is being created and destroyed by banks and shadow banks every day. Over 90 percent of the money supply is created by banks when they make loans, as has now been confirmed by the Bank of England and the Bundesbank, among other authorities. Banks create the principal but not the interest for their loans, so more money is always owed back than was created in the original debt. That means debt always grows faster than the money supply, as shown in the chart below from Mari Werner at WorkableEconomics.com – 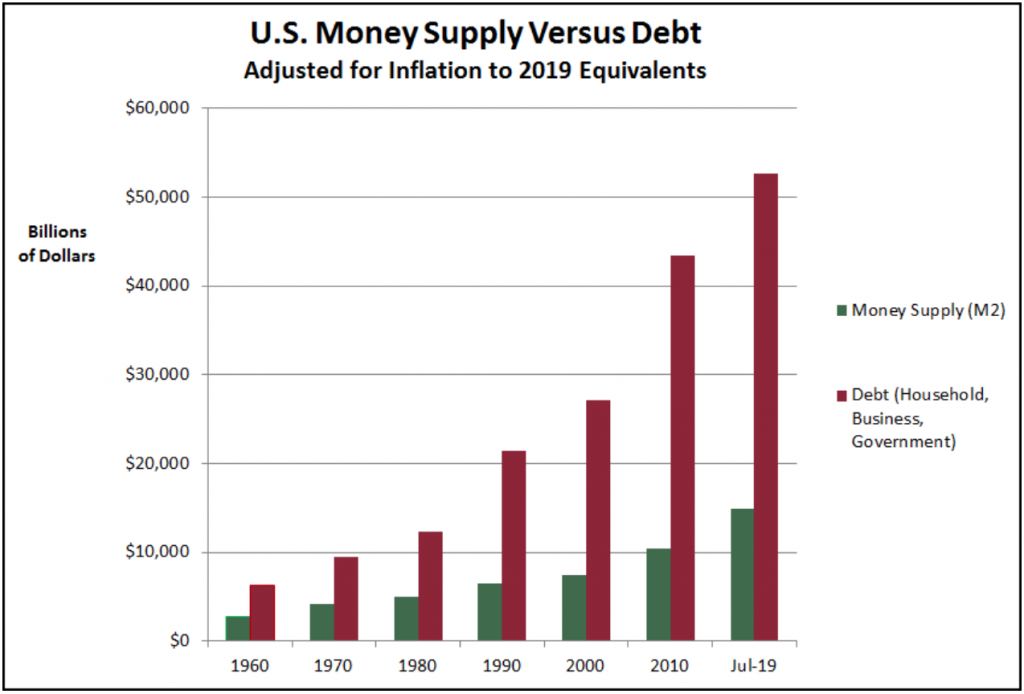 As UK Prof. Mary Mellor formulates the problem in her 2016 book Debt or Democracy (at page 42):

A major contradiction of tying money supply to debt is that the creators of the money always want more money back than they have issued. Debt-based money must be continually repaid with interest. As money is continually being repaid, new debt must be being generated if the money supply is to be maintained.… This builds a growth dynamic into the money supply that would frustrate the aims of those who seek to achieve a more socially and ecologically sustainable economy.

In addition to interest, says Mellor, there is the problem that bankers and other wealthy people generally do not return their profits to local economies. They invest it in the financialized economy, hide it in offshore tax havens, send it abroad, or just keep it in cash. At the end of 2018, US corporations were sitting on $1.7 trillion in cash, and 70 percent of $100 bills were held overseas. The result is a chronic gap between debt and the money available to repay it.

In ancient Mesopotamia, this imbalance was corrected with periodic debt “jubilees” that wiped the slate clean. But today the lenders are not kings and temples. They are private bankers who are not open to debt forgiveness. To avoid a “balance sheet recession,” the gap between debt and the money available to repay it needs to be filled with an injection of new money, and this injection needs to occur every year. If too much money is added to the money supply, it can always be taxed back; but we are a long way from the full productive capacity that would “overheat” the economy today.

According to a July 2017 paper from the Roosevelt Institute called “What Recovery? The Case for Continued Expansionary Policy at the Fed”:

GDP remains well below both the long-run trend and the level predicted by forecasters a decade ago. In 2016, real per capita GDP was 10% below the Congressional Budget Office’s (CBO) 2006 forecast, and shows no signs of returning to the predicted level.

The report showed that the most likely explanation for this lackluster growth was inadequate demand. Wages have remained stagnant; and before producers will produce, they need customers knocking on their doors.

In 2017, the US Gross Domestic Product was $19.4 trillion. If the economy was then running at 10 percent below full capacity, $2 trillion could have been injected into the economy without creating price inflation. It would instead generate the demand needed to stimulate an additional $2 trillion in GDP. Supply and demand would rise together, keeping prices stable.

In fact, substantially more than $2 trillion could have been added without driving up prices, because much of the new money would be saved or used to pay down debt. Recall that money is created as a debt and is extinguished when the loan is repaid. This money would simply disappear, leaving the overall money supply unchanged.

The lack of demand in the economy today is due to a massive, unprecedented buildup of debt. Most people just don’t have extra money to spend. Only 15 percent of Americans have $10,000 or more in savings. Sixty-eight percent of US households have less than $1,000 to meet an emergency, and 28 percent have no savings at all. When helicopter money is injected into a deeply indebted society where most people have insufficient savings, most recipients would not spend it. They would save it or use it to pay down debt.

According to an April 2019 chart provided by financial analyst Lance Roberts, 80 percent of US households must borrow just to meet expenses:

The problem is stagnant wage growth in the face of in an inexorably rising cost of living. Beginning in 1990, says Roberts, incomes alone were no longer able to meet the cost of living, so consumers turned to debt to fill the gap. After the financial crisis, even the combined levels of income and debt no longer filled the gap. About one third of student loans and car loans are now defaulting or have already defaulted. The predictable result is a growing wave of personal bankruptcies, bank bankruptcies, and debt deflation.

According to a second chart from Lance Roberts (below), the gap between annual real disposable income and the cost of living is now over $15,000 per capita, and the annual deficit that cannot be filled even by borrowing is over $3,200: 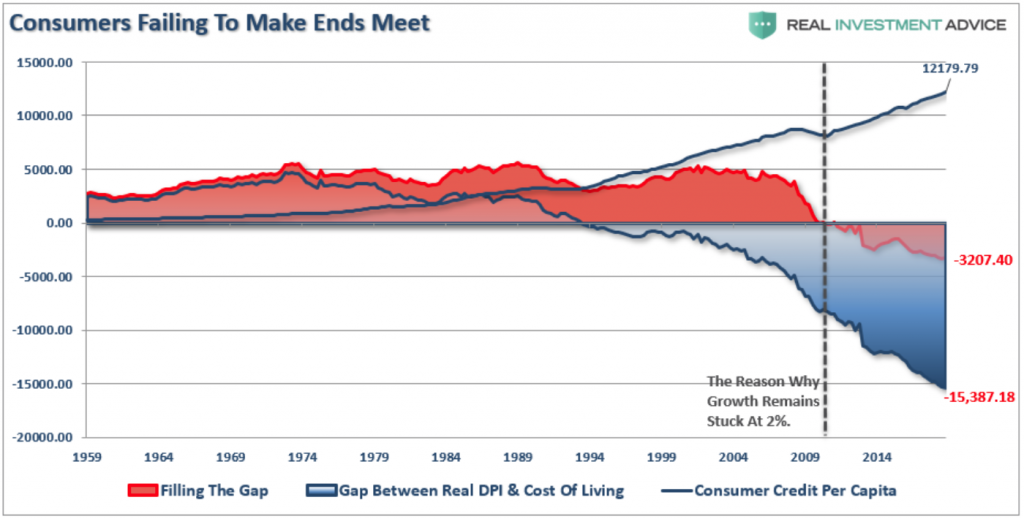 Helicopter money that is used to pay down debt would fill these gaps without increasing the money supply. It would just zero out negative account balances and disappear. If the money were saved or invested, it would not drive up consumer prices either.

Helicopter money could be used in many ways to get money into the productive economy, including building infrastructure, capitalizing a national infrastructure and development bank, guaranteeing small- and medium-sized business loans, providing free state university tuition, and funding Medicare and social security. Another possibility would be a national dividend distributed equally to all US adults, not as “welfare” but as their share of the profits of USA Inc.

For purposes of illustration, assume a national dividend dropped directly into people’s bank accounts of $1,000 per month or $12,000 per year, which would come close to the average $15,000 needed to fill the gap between real disposable income and the cost of living. If the 80 percent of recipients who needed to borrow to meet expenses used the money first to repay their consumer debts (credit cards, student debt, medical bills, etc.), that money would not increase the money supply but would just disappear. These repayments could be made automatic and mandatory.

The other 20 percent of recipients, who don’t need to borrow to meet expenses, would not need their national dividends for that purpose either. Most would save it or invest it in non-consumer markets.

As for the money that was actually spent on consumer goods and services, it would go toward filling the 10 percent gap between real and potential GDP. Supply would rise along with demand, keeping prices stable. The net result would be no net increase in the consumer price index.

Critics of central bank money injections point to the notorious hyperinflations of history – in Weimar Germany, Zimbabwe, Venezuela, etc. These disasters, however, were not caused by government money-printing to stimulate the economy. According to Prof. Michael Hudson, who has studied the question extensively, “Every hyperinflation in history has been caused by foreign debt service collapsing the exchange rate. The problem almost always has resulted from wartime foreign currency strains, not domestic spending.”

For contemporary examples of governments injecting new money to fund domestic growth, we can look to China and Japan. In the last two decades, China’s M2 money supply grew from 11 trillion yuan to 194 trillion yuan, a nearly 1800% increase. Yet the average inflation rate of its Consumer Price Index in 2019 was at the government’s target rate of 3%, despite an African swine flu epidemic that doubled the price of pork; and the year before that it was 2.1 percent. Why did the flood of money injected into the Chinese economy not drive prices into hyperinflation? The answer is that its GDP grew at the same fast clip as its money supply, allowing supply and demand to rise together and keeping prices stable. Another factor was the Chinese propensity to save. As incomes went up, the percent of income that they spent on goods and services went down.

In Japan, the massive stimulus programs called “Abenomics” have been funded through bond purchases by its central bank. The Bank of Japan has now “monetized” nearly half the government’s debt, injecting new money into the economy by purchasing government bonds with yen created on the bank’s books. If the US Fed did that, it would own $11 trillion in US government bonds, over four times the $2.4 trillion in Treasury debt it holds now. Yet Japan’s M2 money supply has not even doubled in 20 years, while the US money supply has tripled; and Japan’s inflation rate remains stubbornly below the BOJ’s 2 percent target. Deflation continues to be a greater concern in Japan than inflation, despite unprecedented debt monetization by its central bank.

Debt-based economic systems actually need regular injections of new money to fill the chronic gap between debt and the money available to repay it. The banking laws of China and Japan require their central banks to work with their central governments in developing monetary policy. If a similar policy were implemented in the US, our economy could be stimulated without triggering an inflationary crisis in the same way.