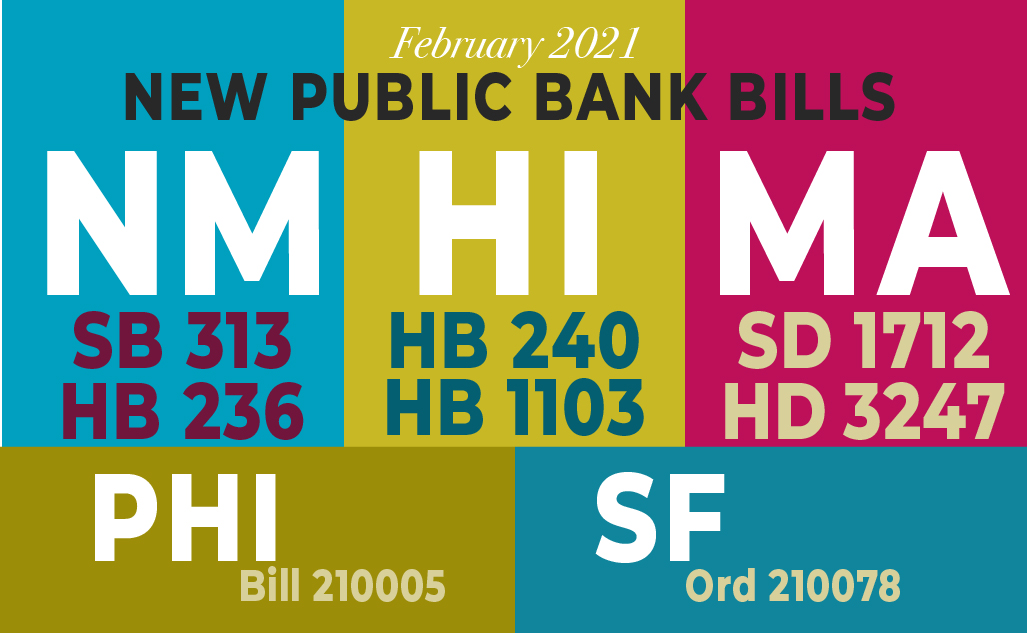 Massachusetts‘ two bills, SD 1712 and HD 3247, were introduced yesterday, Feb. 18, by Sen. James B. Eldridge, and Reps. Mike Connolly and Nika Elugardo after a great deal of focused work by advocates at Massachusetts Public Banking. Read the fact sheet about the bills and join the mobilization effort in that state.

With almost 80 people in attendance, the Committee heard favorable public comment from people of diverse ages and backgrounds from all over New Mexico. Expert witnesses Angela Merkert, Executive Director of AFLEP, and Dan Mayfield of Leverage Point, Inc. fielded lots of good, challenging questions from legislators for more than 3 hours!

Hawaii has two new bills. The first, HB 240 HD1, introduced Jan 22 by Rep. Dale Kobayashi — a former investment banker — and eight co-sponsors, passed the House Committee on Economic Development with amendments on Feb 8 and now heads to the Consumer Protection & Commerce Committee. This bill would establish a working group to propose legislation with a report due by Jan 1, 2022. The second, HB 1103, introduced Jan 27 by Rep. Amy Perruso and many of the same representatives, establishes an implementation board to study the feasibility of a state-owned bank.

Philadelphia City Councilmember Derek Green — another former banker — along with 11 other Councilmembers, introduced Bill 210005 at Council’s first meeting of the year, Jan. 28. The ordinance would create a city-owned economic development financing authority to operate a public bank. The effort has received a good amount of positive press, such as this report from The Philadelphia Inquirer. Advocates at the Philadelphia Public Banking Coalition have been hard at work furthering this effort.

San Francisco’s Ordinance 210078, sponsored by Supervisor Dean Preston and 5 other Supers, creates a working group to write a public bank business plan. Introduced Jan 26, it was referred to four departments on Feb. 3.