Two banking models have competed for dominance for thousands of years – public and private. In the public model, interest and profits belong to the community, and they are returned to the community. Credit is delivered to the economy in an organic way that sustains it and is sustainable.

Publicly-owned banks operate in the public interest by law. That means they must support the real, wealth-producing economy. Bank profits generated from the credit of the public are returned to the public.

The model was proven in the first half of the eighteenth century, in Benjamin Franklin’s colony of Pennsylvania. The provincial government printed its own money and operated a “land bank,” which issued low-interest loans to farmers. The interest returned to the government, funding the provincial budget. Except for import duties on liquor, the government collected no taxes at all. It also had no debt and paid no interest. There was abundant money for trade and the economy thrived.

In the competitor model prevailing today, privately-owned banks (sometimes called “usury” banks) operate for private gain. They are extractive rather than cooperative and supportive, focused on maximizing profits for their owners and executives. Classical economists called these financial profits unearned and said they should be heavily taxed; but today, with lawmakers captured by the profiteers, they are taxed only lightly if at all. 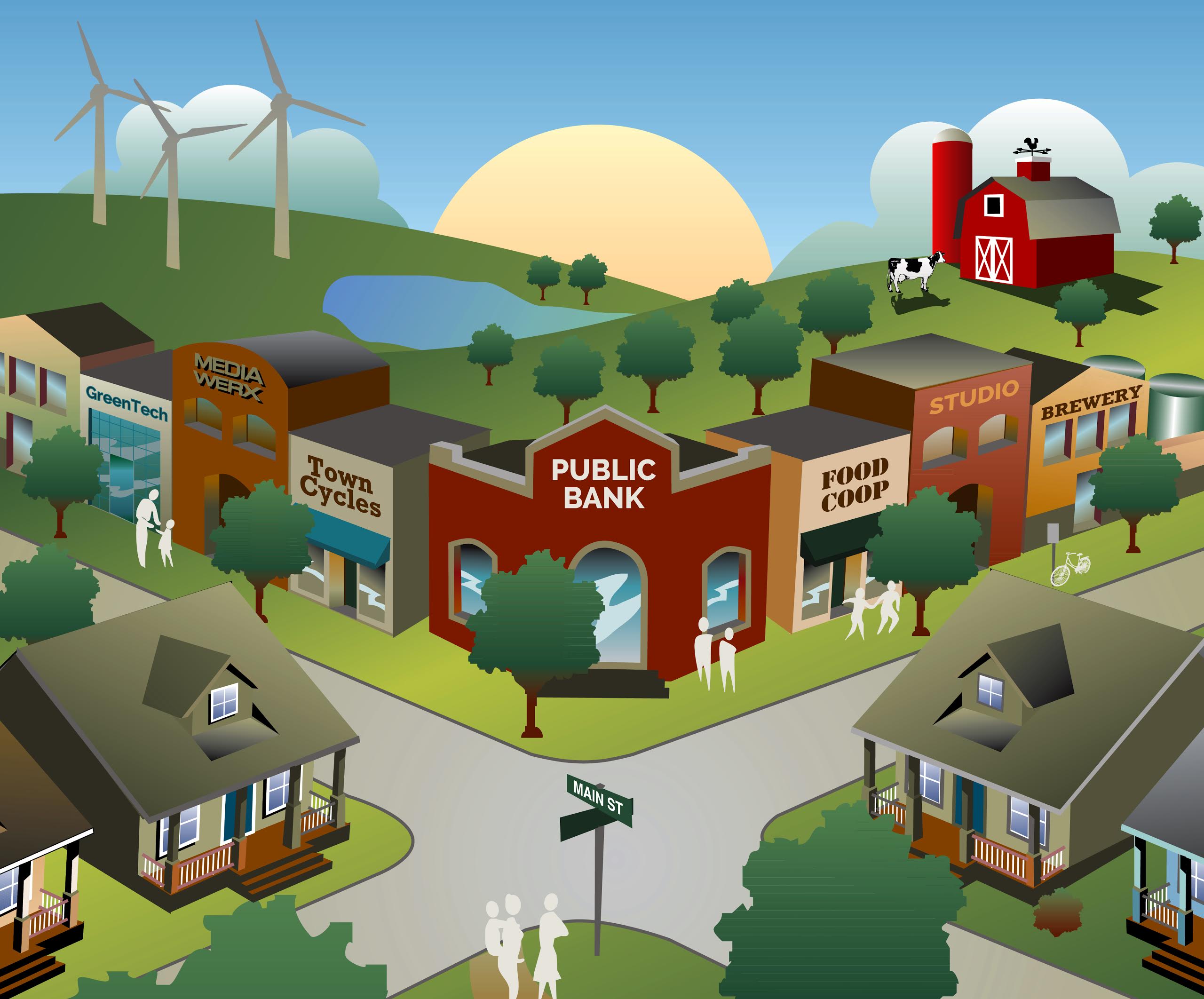 Neoliberal economic theory assures us that what is good for the big privately-owned banks is good for society – that private ownership produces better results in that sector as in all others; but the data tell a different story. Usury banking dominates in Western countries today, but 40 percent of banks globally are publicly owned. These are largely in the BRIC countries – Brazil, Russia, India and China – which also house 40 percent of the global population. In the first decade of the 21st century, the BRICs boasted growth in GDP of 92.7 percent, while Western economies limped along at a very modest 15.5 percent.

The BRICs moved into public, cooperative banking out of necessity. With massive populations that needed to be fed and housed, they could not afford to support a parasitic financial elite. The BRICs have problems, but they don’t have our problems. Unburdened by counterproductive financial sectors, they have strongly upward economic trajectories, while the West’s are stagnating.

The advantages of public over private banking are not rocket science. A government that owns its own bank can keep the interest and reinvest it locally, resulting in potential public savings of 35 percent to 40 percent. Costs can be reduced across the board; taxes can be cut or services increased; and market stability can be created for governments, borrowers and consumers. Banking and credit become public utilities, sustaining the economy rather than mining it for private gain. And banks again become safe places to store our monies, both our public revenues and our private savings.

Excerpt from “The Public Bank Solution,” by Ellen Brown.

History of Public Banking in the U.S.

America has a history of sovereign creation of currency. The American colonists, lacking gold and silver, experimented and thrived with paper currency for 100 years. The best example was in colonial Pennsylvania whose public bank, highly praised by Benjamin Franklin, lent and spent money into the community, solving the interest problem. When the European bankers convinced the King to prohibit the colonists from printing their own money, the ensuing recession was the root cause of the American Revolution. The US has created money multiple times during its existence. The Continental Congress issued paper currency, the Continental, to fund the American Revolutionary War.Lincoln created the Greenbacks to fight the Civil War instead ofborrowing from European banks who demanded 36% interest.

Public banking was first introduced in America by the Quakers in the colony of Pennsylvania. Several other colonial governments also established publicly-owned banks and found them to be beneficial. In the 19thcentury, the concept was embraced by a number of states. But by the time the Bank of North Dakota was established in the early 20th century, it held the field alone.

By early 2009, following the banking crisis of 2008, North Dakota was also the only state sporting a major budget surplus. It had the lowest unemployment, foreclosure and default rates in the country. It also had the most community banks per capita, confirming that the presence of a state-owned bank has helped rather than hurt its local banking sector.

The Bank of North Dakota was founded in 1919 to insure a dependable supply of affordable credit for the state’s farmers, ranchers and businesses.  It makes low interest loans to students, existing small businesses and start-ups. It partners with private banks to provide a secondary market for mortgages, and it supports local governments by buying municipal bonds. To find out more about the Bank of North Dakota, click here.

Recently, two new publicly-owned banks in the U.S. have been established, the Native American Bank and the Bank of American Samoa.  As of August 2018, 15 bills are actively being pursued in cities and states across the country, showing serious legislative interest.

Under the model of the century-old Bank of North Dakota (BND), all of the state’s revenues are deposited in the Bank by law. The BND also takes a token number of individual depositors, but roughly 98 percent of its deposits come from public coffers.  The BND’s charter does not allow it to compete with local banks. Instead it partners with them, helping with depository, collateral, and regulatory challenges.

The Bank of North Dakota pays its dividends to its only shareholders — the people of the state. Over the past two decades, despite its small population, the Bank of North Dakota has reported record profits year after year, allowing it to return several hundred million dollars to the state’s general fund. This has helped it to avoid the drastic tax increases and cuts to vital public services suffered in other states.

VIDEO: An Introduction to Public Banking, by In Context Report (7:23)