It's the Interest, Stupid! Why Bankers Rule the World

12. The problem of interest and unsustainability. While banks create the principal portion of loans, they do not create the interest. Thus, our current private system is inherently inflationary and Ponzi- like, because new loans must always be issued to create the money to pay the interest on the previous loans. In FY 2011, the interest on the federal debt was 42% of federal individual income tax receipts.

13. Our current privatized monetary system redistributes wealth from the large majority to a small minority via interest. According to Margrit Kennedy, interest now composes 25%-40% of everything we buy (50% for government projects). It is Wall St. and the financialservices industry that take this large cut. As Glen Edens, former HPexecutive, states:“…a strong financial services industry is simply not good for society. Wall Street does not improve productivity, the model is parasitic, transferring huge resources out of the system…” If the government owned the banks, the interest would return back to the people, thus providing for a more equitable and sustainable system.

The Example of the Bank of Canada

Even the world’s most resource-rich country has now been caught in the debt trap.  Its once-proud government programs are being subjected to radical budget cuts—cuts that could have been avoided if the government had not quit borrowing from its own central bank in the 1970s.

Between 1939 and 1974, the Canadian government actually did borrow from its own central bank.  That made its debt effectively interest-free, since the government owned the bank and got the benefit of the interest.  According to figures supplied by Jack Biddell, a former government accountant, the federal debt remained very low, relatively flat, and quite sustainable during those years.  (See his chart below.)  The government successfully funded major public projects simply on the credit of the nation, including the production of aircraft during and after World War II, education benefits for returning soldiers, family allowances, old age pensions, the Trans-Canada Highway, the St. Lawrence Seaway project, and universal health care for all Canadians.

The debt shot up only after 1974.  That was when the Basel Committee was established by the central-bank Governors of the Group of Ten countries of the Bank for International Settlements (BIS), which included Canada.   A key objective of the Committee was to maintain “monetary and financial stability.”  To achieve that goal, the Committee discouraged borrowing from a nation’s own central bank interest-free, and encouraged borrowing instead from private creditors, all in the name of “maintaining the stability of the currency.” 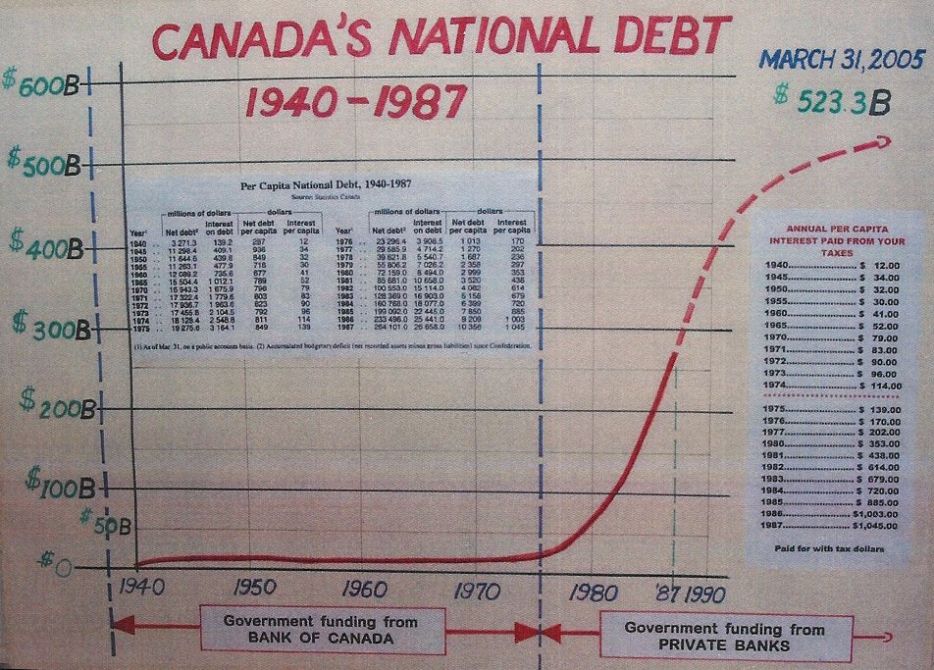